A downloadable game for Windows, macOS, and Linux

Olivia’s high school years weren’t satisfying, to say the least. Trapped in a small town and perpetually unlucky in love, she vowed to leave it behind the instant that graduation cap flew. She takes her chance now with the nearby (but not too nearby) Talpin University. At once overwhelmed and inspired by the new sights and sounds, she hardly knows what to do with herself.

Could this new school, and the sea of new faces that come with it, be her chance to start fresh? Maybe even find love?

Proposed as a celebration of 10 years of game development under the Moleworks label (yes, really!), "Talpin University" is a crossover dating sim of numerous Moleworks characters past, present, and future. The selection is small now, but set to grow with future patching!

"Talpin" lets the player romance a bevy of datable options, both men and women, in a cozy university setting. All the while, challenging them to balance their social and academic life. The tone is light and fluffy, opting for a good time with a charming student body over high drama.


The game is still in development, and the version currently up for download is a demo! It contains only Cadfael's route, and is subject to change! 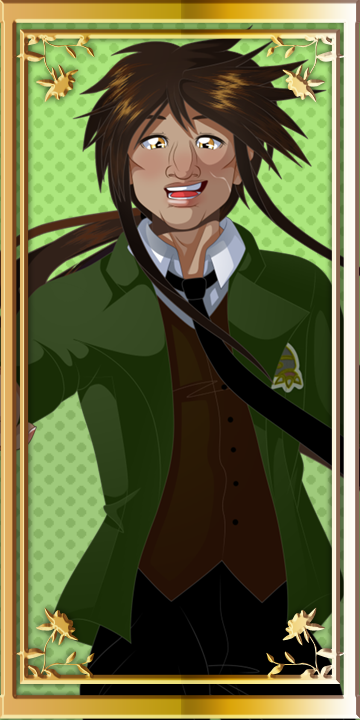 A popular, ambitious athlete riding off a scholarship. Though his dedication leads some to believe he is aloof, Cadfael is actually exceedingly friendly and charming. Secretly, he barely made it as far as he did, owing to a difficult childhood. He is self-conscious of his grades, and admires intelligence in others.

Full of energy, be prepared to expend your own to interact with Cadfael on his own terms. 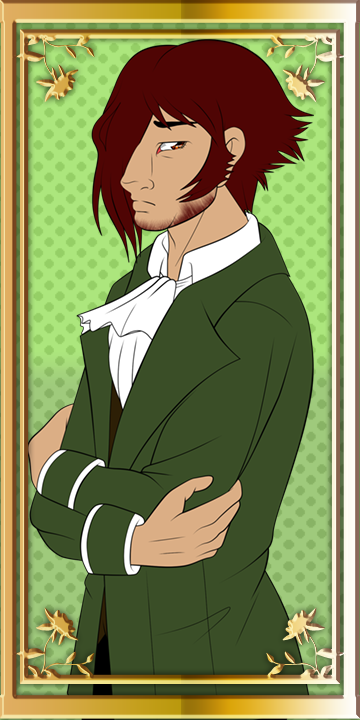 A mysterious vocalist for Talpin’s band club. Seiji is the apple of many a student’s eye, but he doesn’t seem to care. Seiji is all work, no play. Spending many a long hour between the band and culture clubs, it’s a wonder he has time for school work. He seems happy enough with that, but is he really?

Valuing politeness above all else, you’ll need to approach Seiji with caution. You have to wonder why he’s so distant towards you… 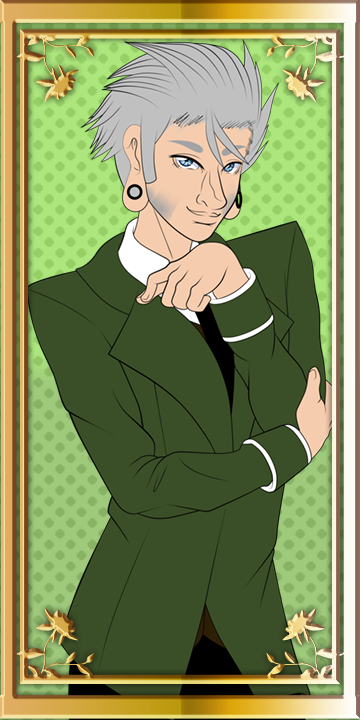 A quietly rebellious spirit from a rich family. Sterling knows how to lay on the charm, but something about it seems disingenuous. Sterling attended Talpin against his family’s wishes, just for something new. Even in this new environment, he finds it hard to drop the double-speak and duplicity of his former life. Though surrounded by admirers, he has very few real friends.

You’ll have a lot to unpack to see Sterling’s true self, but just maybe it’s worth it.

Delete- Delete a save slot when slot is selected

"Talpin University" Plays out over the course of 80 days.

The player's goal during these 80 days is to appeal to their character of choice through three means -- affection, stats, and grades. Each character has one or more stat they prefer, as well as minimum grade they require the player to achieve. Meeting these requirements, will trigger an event when that character is on campus.  This, in turn, will let the player gain more affection through interactions with the character, which will trigger further events.

However, tending to any one of these depletes the player's limited energy, so balance is the name of the game!

Each of these 80 days are divided into four phases -- early morning, morning, evening, and night. 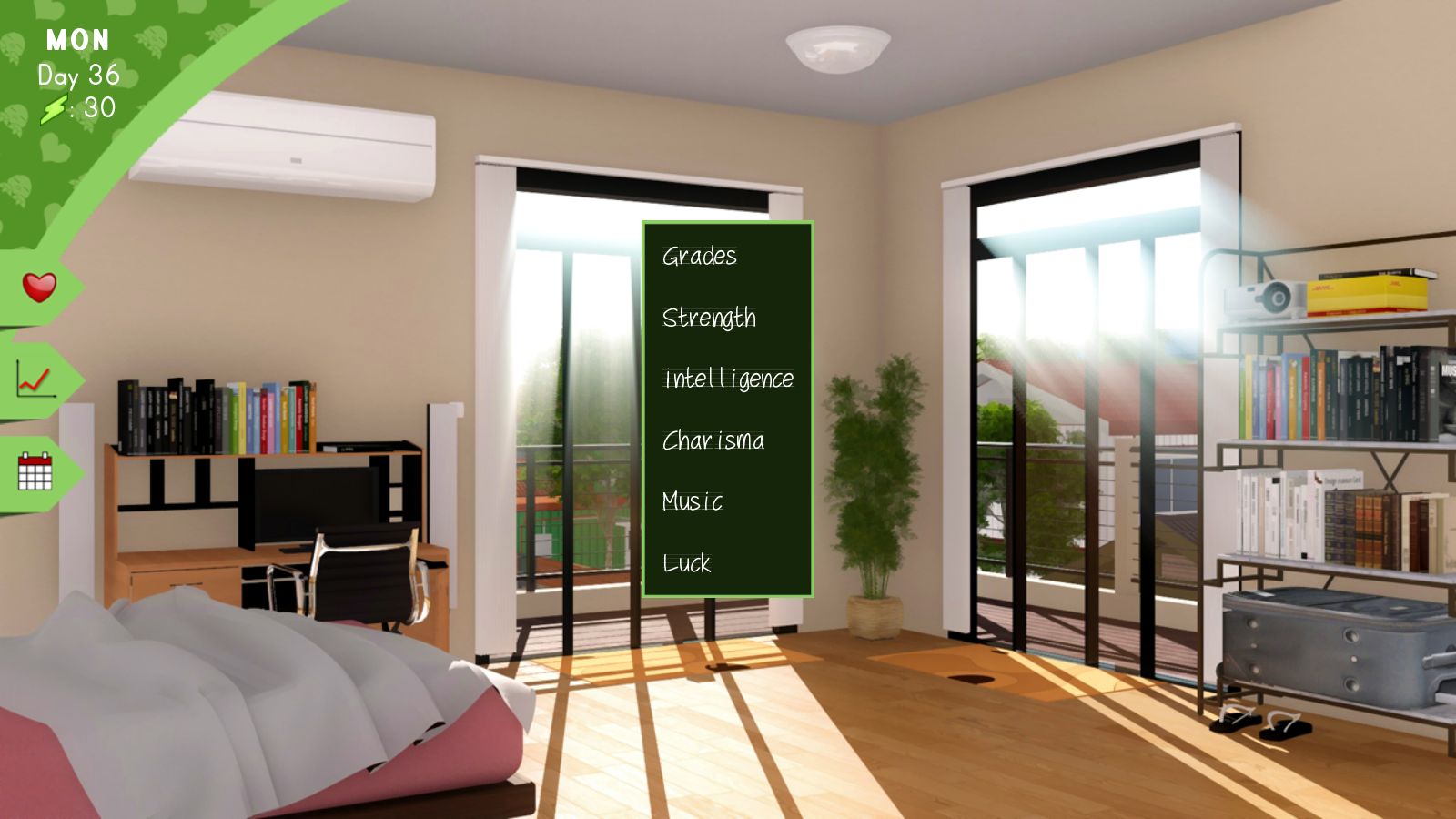 During early morning, the player can select a subject to focus on for the day. Should the player raise that stat during the evening phase, their rewards will be boosted, at the expense of a higher energy cost. 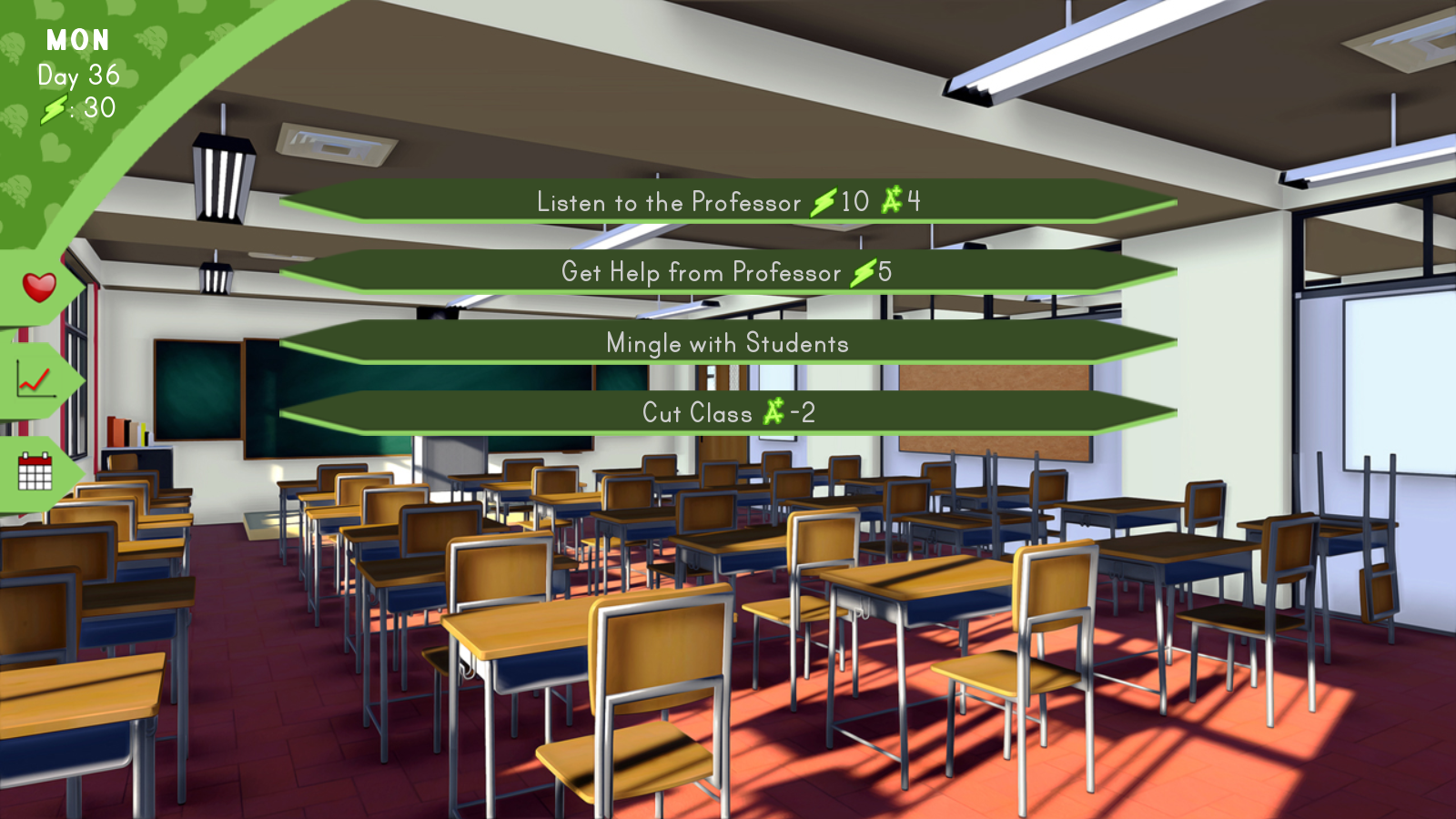 The morning phase focuses on the player's classwork. During this phase, the player can choose between listening to the professor, mingling with students, or cutting class.

Mingling with students may occasionally trigger an event if a character's requirements are met. If not, the player is returned to the class menu to try something else. Therefor, it is highly encouraged to try mingling first.

The player can also consult the professor for hints on each student's requirements, at a small energy cost. It's highly recommended the player consult with them regularly, as these requirements may change. 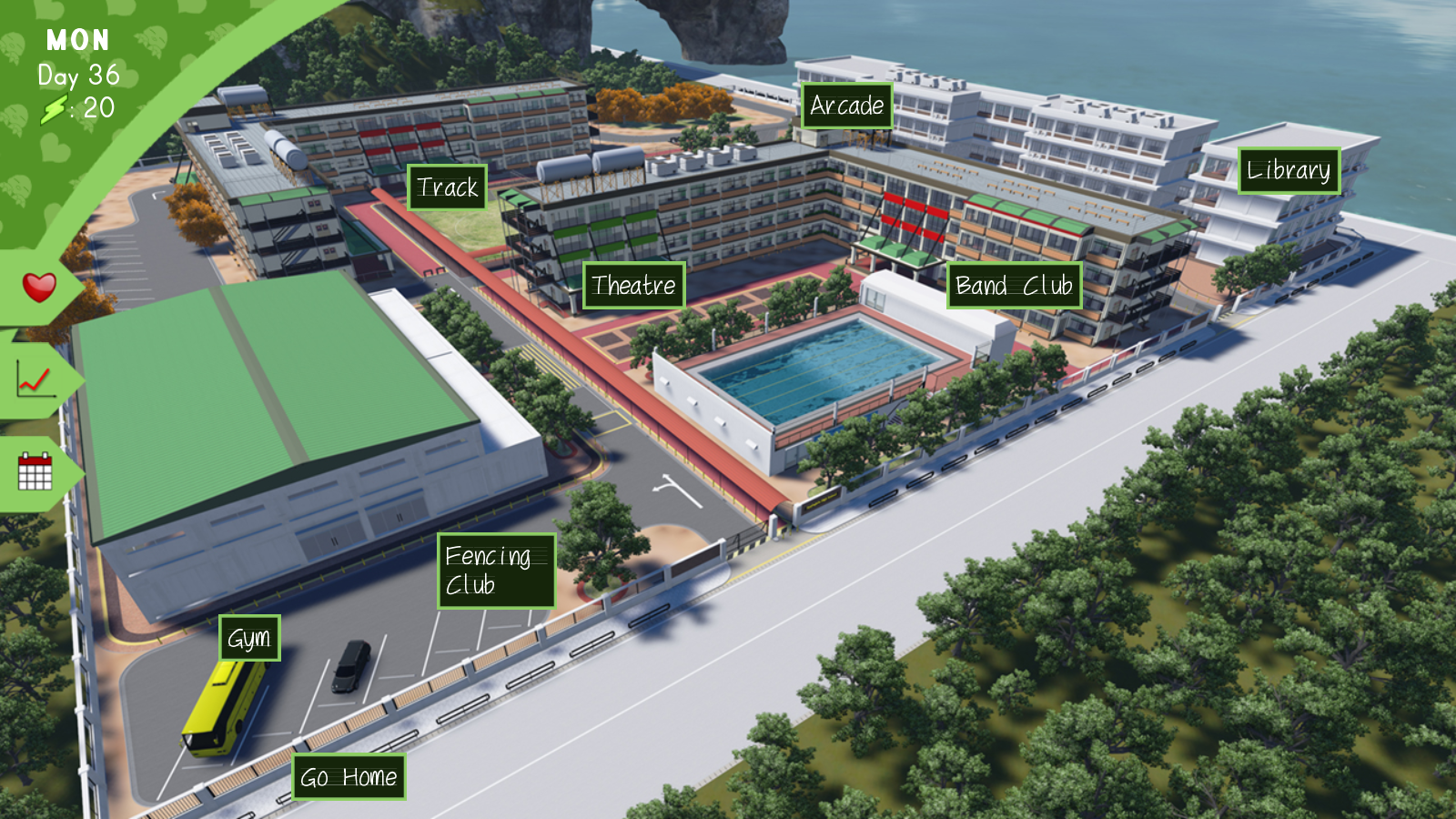 Once the player has finished the morning phase, this at last brings them to the evening phase. From here, the player can travel freely to any of the locations on campus. Some locations, such as the library, band club, and gym, will let the player raise an associated stat at the cost of their energy. All locations are liable to trigger events. 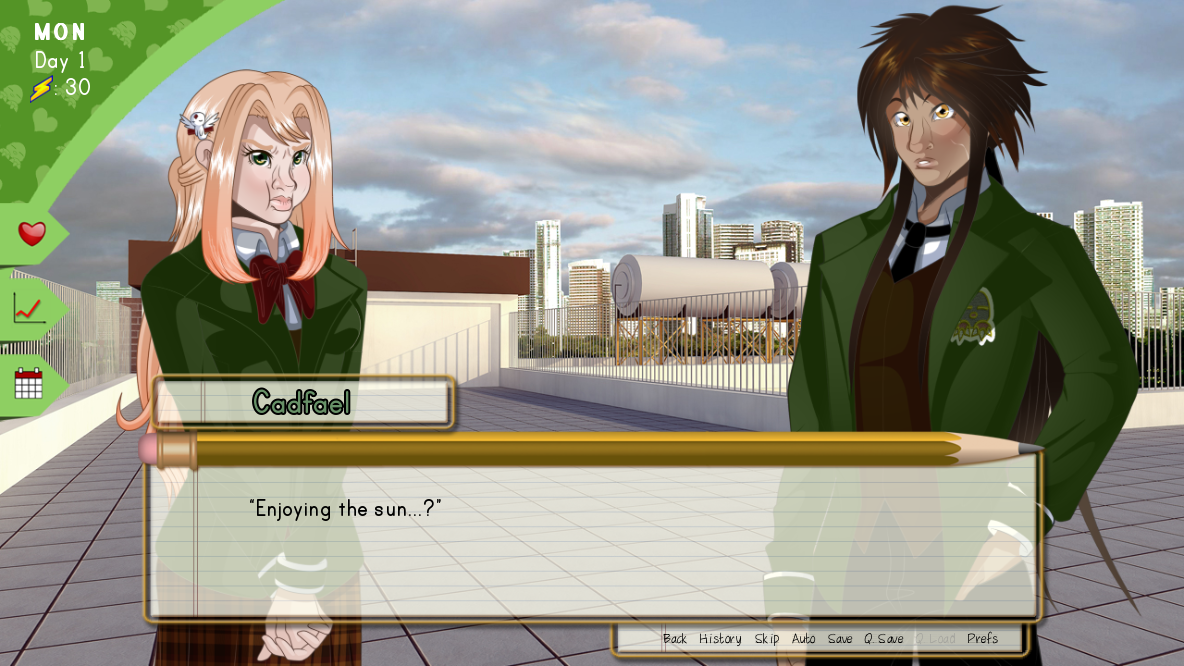 During an event, the player is tasked with simply spending time with a character. Occasionally, they may be presented with a dialogue choice that may or may not effect the character's affection towards them.

While most of these choices are straightforward, some may require a little forward thinking. Remember: The best choice for a character may not be the easiest one.

Once the event has finished, the player will either be returned to the map, or sent home. 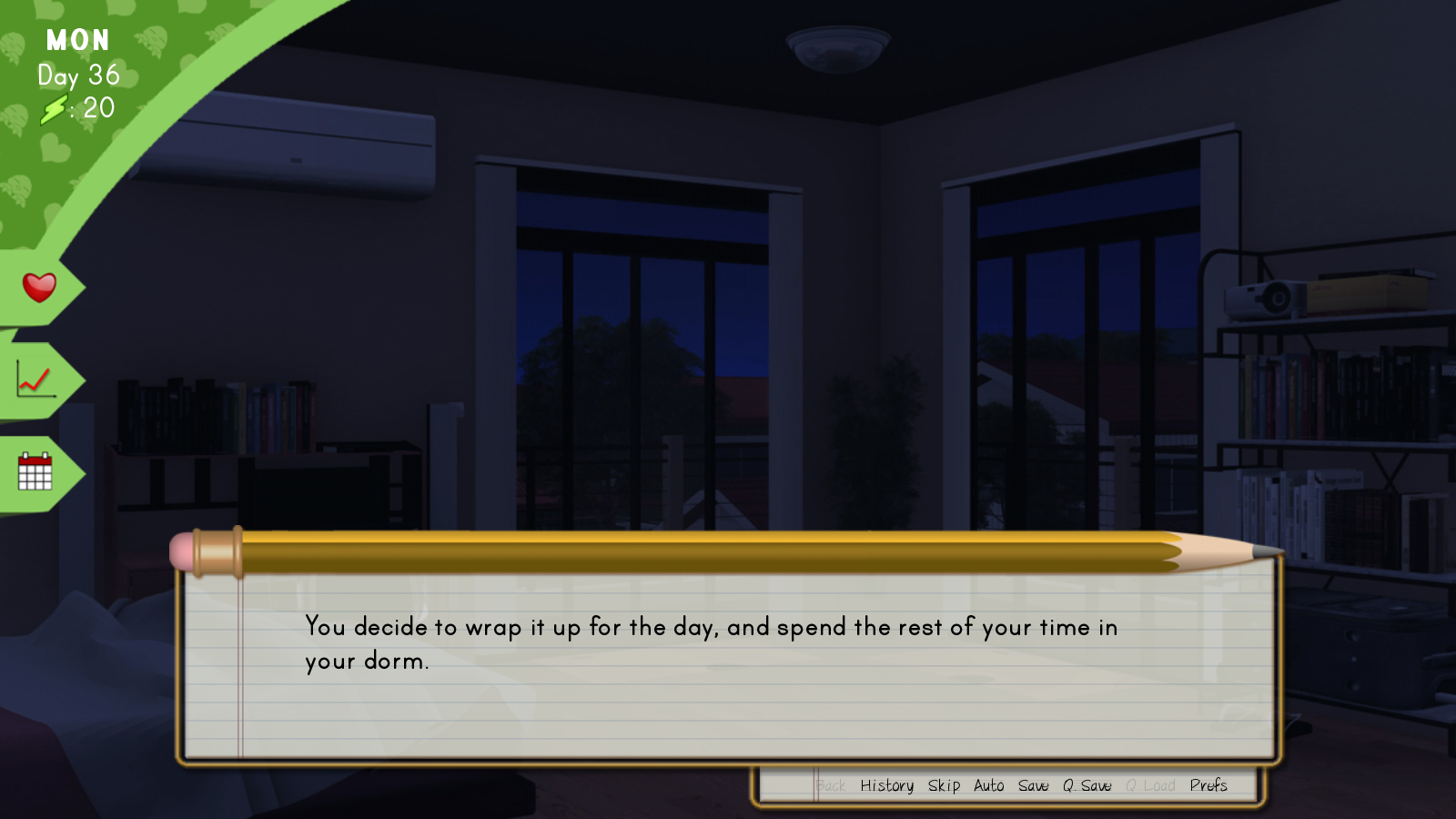 If the player hasn't already been sent home, they can return by themselves to begin the night phase. This simple phase locks in the player's progress for that day, before starting the new one. Rarely, events may occur during this phase.

Why won't this character appear?

There are many reasons a character might not appear.

1.) They may not be on campus that day. Every character has their own schedule, and their events will not trigger if they aren't on campus.

2.) You may not be close enough to them. Sometimes, the correct choice for raising a character's affection may not be obvious. It may even hurt them, at first!

It's recommended to save often, especially during dialogue choices, so you can change them later.

3.) Your stats aren't high enough. Check with the professor to see which stats the character favors, and focus on them. Keep in mind these preferences may change during the course of the game.

4.) Your grades aren't high enough. Some characters heavily favor high grades, and will not appear if your grades dip.  Unless the professor states the character "does not value grades", this may be worth looking into.

Are Lucille and Walter dateable?

Lucille and Walter are not dateable at this time. Only Cadfael's route is included in this demo.

I like the game! When come the next route?

Thank you! I'm glad you enjoy the game.

The full game had been put on a bit of a hiatus to work on other things, but I've been trying to get back into it recently. I can't make any promises on an expected delivery, but do know it's coming. I'm scripting Seiji's route at present.

I have noticed one or two issues, though: I'm assuming the main character from the book we read is supposed to be the same gender as the VN's protagonist, but they're referred to as a "heroine" even when playing as a guy.

Similarly, the gallery only shows CGs for the female protagonist, not the male one.

On a different note, I went to the party on Friday, and yet it was Monday when I had the hangover...

It's not exactly a problem with the game, but it would be nice if the walkthrough told us what days Cadfael was around for, and also what dates the events start on.

Thanks! Good luck with this game and your others!

Oh, really? Thank you for letting me know! I'll look into this and make sure it's addressed in the full release. I appreciate the input.

The CG issue is a known issue that I couldn't find an elegant solution for in time for the demo release. I'll do my best to address it for the full release.

As for the date discrepancy, the game only has weekdays programmed in to its cycle, and the event utilizes the same system. I can try and put in some one-off code to overwrite the text if it's really bothersome, but it will likely be treated as low priority. Either way, thank you for letting me know!

The walkthrough issue has been duly noted and I'll get around to editing it as soon as I can.

I'm sorry to hear that. If the game presents an error, could you please send a screenshot of it? 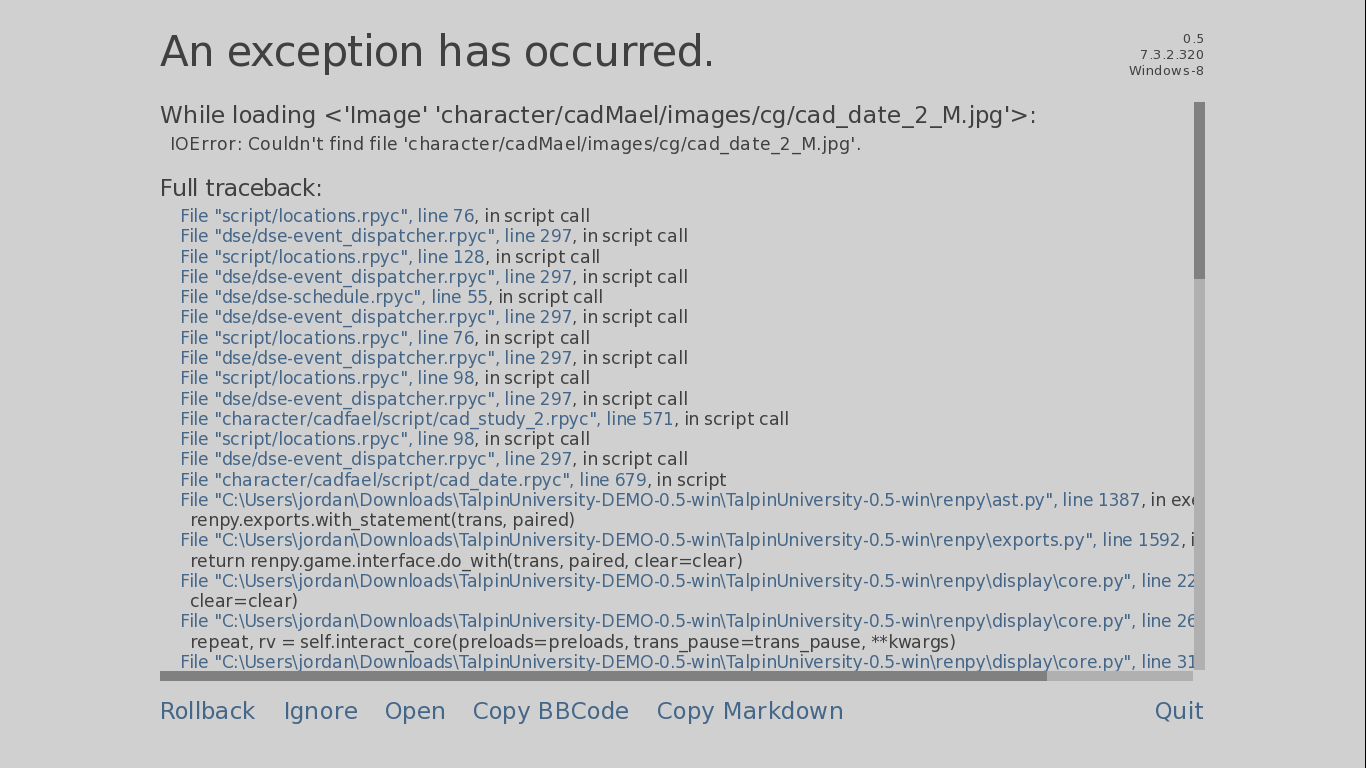 I understand. This one screenshot is plenty! I'll correct this issue and release a patch later today. Thank you for bringing it to my attention.

Until then, I recommend making a save right before the error so you can reach this spot easily.

A patch addressing your issue has been released. You can find it here or on the game's main page.

Thank you again for reporting this issue, and I apologize for the inconvenience.

thank you it work's :) and its a very good game

Glad to help! And I'm glad you're enjoying it. :D

I love this game, but I'm really struggling to reach the 50 points with Cad as to not be turned down. Will you be posting a walk through/guide at all?

Hello, sorry you're having difficulty with the game. I will definitely be making a walkthrough since so many players have been having trouble. Thank you for bringing it to my attention!

Hello again! A walkthrough has been added if you still need it.

How many relationship points should i have with cad so he won't turn me down during study?

You should aim for 50 points or above.

If you're having trouble reaching that number, bear in mind that being honest with Cadfael during some of his interactions will give you more points long term than being gentle with him. Hope this helps! 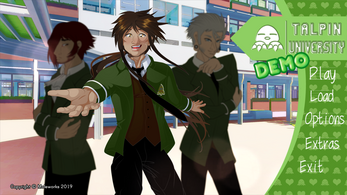 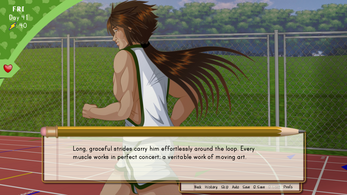 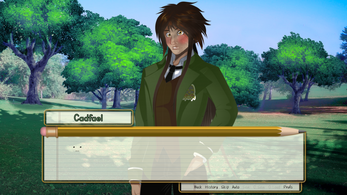 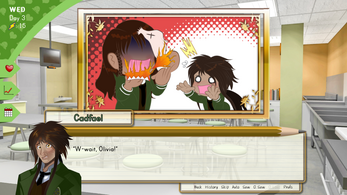 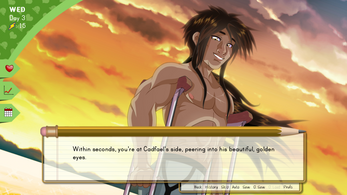 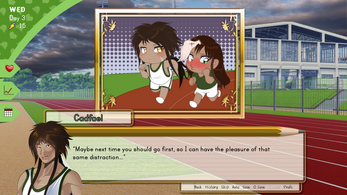